More than 500,000 pieces of debris, or ‘space junk’, are currently being tracked around earth’s orbit travelling at speeds of up to 17,500 mph, fast enough for a relatively small piece of orbital debris to damage a satellite or spacecraft. ()

Adding to this problem, the number of satellites in Low Earth Orbit is set to grow between 5x and 50x over the next 10 years. SpaceX alone has filed applications to launch nearly 12,000 internet-beaming satellites.

The rising population of space debris and new satellites increases the potential danger to all space vehicles. Today more than ever there is an incredible demand from customers to help with satellite identification, satellite commissioning and troubleshooting in-orbit.

High Earth Orbit (HEO) Robotics, led by William Crowe, UNSW Faculty of Engineering and UNSW Founders 10x Accelerator alumni, is approaching this challenge by using optical observation of space objects that matter in space, from space. Instead of using sensors from earth’s surface, HEO Robotics leverages other satellites in orbit to perform inspections.

Recently, HEO Robotics software managed to capture imagery of the International Space Station (ISS) from another nearby satellite. In order to capture a detailed image, the newly developed software had to provide millisecond accuracy to take the image given that the two satellites were passing by at a relative velocity to each other of 36000km/hr. More remarkable given that the image was taken from a distance of over 300km.

This image is part of HEO Robotics’ invitation-only customer pilot program, which collects performance analytics from multiple orbital images of customer-operated satellites. The resulting insights will help customers confirm satellite identity, perform external checks of damage, and verify orientation of deployables, spin-state and position, insights that are often either slower to achieve by ground-based systems within the timeframes that HEO Robotics will be able to achieve, or for many orbital types, completely impossible.

"This is our first successful test to image the International Space Station from an Earth Observation satellite. It’s an important step in verifying HEO's software and strategy to become the first company worldwide to launch a full-feature in-orbit inspection service next year to Low Earth Orbit."  William Crowe, CEO, High Earth Orbit Robotics.

HEO Robotics is working towards a 2021 release of a fully operational service, in time to provide solutions for the tens of thousands of satellites planned for launch over the next several years. 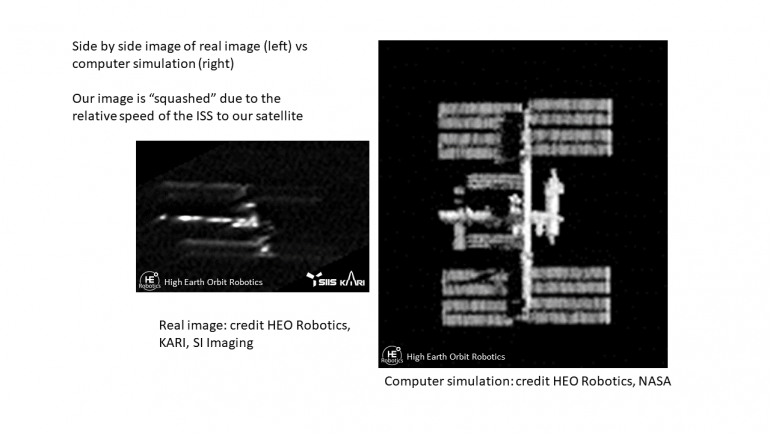